How to Play Free Crazy Eights 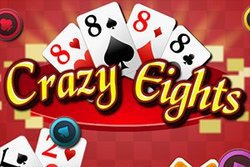 For many years, Crazy 8s has been a preferred game that is played at home and it is a perfect starting point for anyone that is learning how to play cards. This game is simple and fun and since there are not many rules, it can be enjoyed by players of all ages and all experience levels. This thrilling game can be played with 2 to 7 players and the more, the merrier. The game is played with a standard deck of cards and when more than 5 players are enjoying free crazy eights, two decks may be shuffled together, providing 104 cards to be played. This classic game was first called Eights when it was first played back in the 1930s and the name Crazy Eights started being used in the 40s and was derived from the discharge of mentally unstable soldiers from the US military.

When gamegarden.net visitors start learning how to play crazy 8s, they will want to review all game rules before they start any game. The game is quite simple and will begin with 8 cards being dealt to each player. The remaining cards are placed in the center of the table. Players will then match the top card of the pile in rank, suit or with an 8. If they cannot do this the player will draw from the pile until they can get a playable card. When a player uses an 8, they will have to declare the suit that the next player has to follow.

The game will end when one player had no cards left in their hand. That player will then collect payment from each player at the table by adding the card values that are left in the hand. 8s will be worth 50 points, face cards are worth 10 and all others are at face value. The winner of the game will be the one that reaches a specific point total that has been set when the game began. For games using two players, this is usually 100 points, with three players it is 150, 200 for four players, 250 for five, 300 for six and 350 for seven. However, players can set their own point limits when they play cards for money. 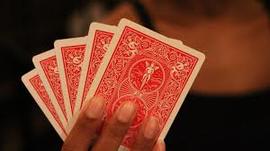 When players are enjoying free crazy eights online or at home, they can make use of basic strategies that can help them win more hands. When players are deciding whether to stay with a suit or match the card rank, it is best to keep the suit that the player has most of. This will help them discard more cards as long as other players do not change the suit. When playing matching suits, it is best to play the highest valued card since these are worth more if players get stuck holding them at eh end of the game.

Players need to play the game defensively as well so if a player has played an 8 and named a suit, one can assume they need this suit to go out. The best thing to do is change suits by playing a ranked card or by playing another 8 before that player gets another turn. If there is no need to use an 8, it is better to save these for later in the game. It can be beneficial to draw a card instead of wasting an 8 as these are the most powerful cards when the game is coming to an end. However, players do need to make sure they get rid of al 8 cards before someone else wins. These hold the highest point value, so players will not want to get stuck with these. With these simple strategies, any player can learn how to play crazy 8s and will have better chances at winning when they play free crazy eights games online or with friends and family at home.

There are many online sites and even mobile apps that provide the player with access to classic card games. Most of these will support basic titles like Crazy Eights and players will be able to play this game for free and enjoy hours of entertainment. With free crazy eights online, one will learn how to play cards with other players or against computers, so there is endless action available 24 hours a day.