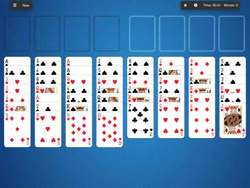 Freecell solitaire is one of the most popular games being played and the great thing about this game is that it is actually possible to win every game that is played if players use the right strategy and take their time while enjoying the game. With easy Freecell games, players will enjoy hours of entertainment. Since so many players all over the world enjoy the action of this game, it can be found at many online sites like GameGarden and there are also free cell game apps that can be added to mobile devices, allowing players to access this top-rated game at any time. Get ready to enjoy one of the classic solitaire games and find out how to be a winner with just about every game played.

Freecell no download is a version of solitaire that will take some skill and strategy to win, but it is a game that you can play for real money at gamble sites. The goal is to place all of the cards in foundations. On the game board, cards will be placed in alternating colours and in a descending order. By moving cards from the table to the foundations, the game can be won. Easy Freecell games are a bit different from standard solitaire selections. With this game, there are spaces where cards can be held, called free cells. These cells are located in the upper left of the game and can be used to transfer cards from the playing table to the foundation spaces.

By using some simple strategies, players will find they are able to win more games. The main strategy is how and when to use the free cells that are provided. Before making any moves on the tableau, players should take time to analyze the layout of the cards that are in play. Games that start with low cards near the bottom will be easier to win. When it comes to free cells, it is best to keep as many of these open as possible. With empty cells, players can move longer sequences of cards, so the game will be easier to win.

While the free cells play an important role, an empty tableau column will be more powerful as they will double the number of cards that are able to be moved. By creating packed sequences in the tableau instead of using up free cells, players will find the game to move quickly and they will also learn they have great chances of winning. These simple strategies can be used with any easy Freecell game and with just a bit of practice, players will see how t his game can be addicting and enjoyable. 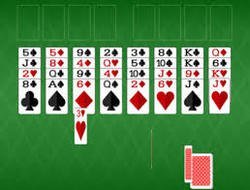 When players choose to play easy Freecell no download games online, they will find they are able to alter the rules, which will also alter the difficulty level of the game. With a standard version of Freecell no download, players will have four free cells available. However, it is possible to alter this so that three, two or even a single free cell is in play. When using three cells, there is still a 99.3% chance that all of the games can be won. This percentage is reduced to 78% when using two free cells and down to 19% with a single free cell in play.

Players will also be able to select a Hard or Easy game format. Easy Freecell games consist of cards being shuffled in a way that low ranking cards will be placed at the bottom of the columns. With a hard game, the low cards will be dealt early, so it will be more difficult to reach them, requiring more strategy and thinking on behalf of the player.

Any fan of old and new card games will find easy Freecell games to be a challenging, yet enjoyable game to play. This game is more of a brain teaser than other versions of solitaire, so players who like to use strategy and problem-solving techniques will benefit from playing this game online or on a mobile device. With hundreds of free cell game apps and card game sites online, there are tons of options when it comes to playing free versions of this appealing solitaire selection.